Tips on Writing a Sequel

First, a big thank you to Michelle Proulx for letting me write a guest blog in honor of the July 31st debut of my second book, Legends of Windemere: Prodigy of Rainbow Tower.  I think that covers the shameless self-promotion part of the program.  Wait.  Feel free to buy and read Legends of Windemere: Beginning of a Hero, so you’re ready for the sequel.  There.  That should do it.

So, you want to write a sequel.  It’s a common malady for fiction authors.  You love your characters and you have subplots that need more time to run their course.  You have a new villain that you want to use. That infomercial at 3AM gave you the best idea for another story with the same characters.  There’s also the chance that you had a series planned all along and this is the natural progression of your career.  In the end, the sequel is there and you’re ready to write it.

My story is that my books are based on a college Dungeons & Dragons game.  I knew from the beginning that a series would have to happen.  Each semester had a different quest as the heroes moved through the dice rolls.  Then I realized I had to put some work in and altered a lot before I sat down to write.  The big difference is that characters don’t evolve too much over the course of a single adventure in a game.  In fact, many players have their characters stay the same in terms of mentality and emotions.  I had to shake things up and put growth into the story, which is why I take sequels very seriously.  You need all of your main characters to change in every book even if it’s minor.  For example, one character might go through a life-changing event while another learns a new skill.  Both are growth, but one is definitely heavier than the other.

I would say one of the most difficult parts of writing a sequel (and I’m writing the 5th book of the series here) is balance of characters.  Specifically, your old characters versus your new characters. You have your original heroes that you need to keep some focus on and retain what they had in the first book.  You must also put them in situations that test their strength and develop them beyond their original forms.  This takes a lot of work because you don’t want to go too far or spend all of your time on it.  Yes, these are the characters you started with and they have seniority, but they also have fans and reputations that your new characters are setting out the gain.

The balance with new characters is that you need to highlight them without overshadowing your old characters.  They need to merge into the preexisting group, but not so flawlessly that it’s unbelievable.  Think about how you make new friends and try to work off that.  You might even want to go with a new character that the old ones have trouble getting along with.  I introduce a very powerful spellcaster named Nyx in my new book.  She is temperamental, rude, and difficult to get along with at first.  It makes for an interesting story because she butts heads with the main hero of the first book, Luke Callindor.  This gave me the opportunity to delve into the tolerance and friendship making ability of these two characters.  In the end, I create a very tight and clear dynamic between them.

Here are some simple tips about writing a sequel:

Those are the big points about writing a sequel.  If this inspired you to write a sequel or plan a series then I’ve done my job.  Again, have fun and enjoy yourself! 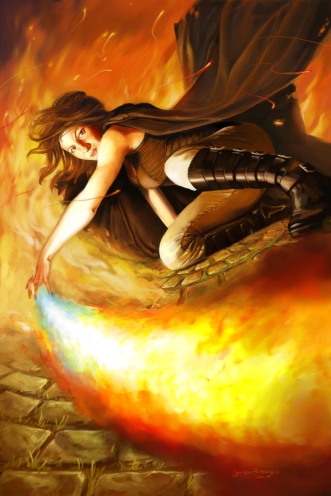 You can check out Charles Yallowitz’s debut novel, Beginning of a Hero, by clicking here.

And you can check out the sequel (release date: July 31, 2013), Prodigy of Rainbow Tower, by clicking here.