Writing in the Bathroom

I’ve discovered the ultimate cure for writer’s block. And it’s the simplest thing in the world. Ready?

The Ultimate Cure for Writer’s Block

Keep a notebook and pen in your bathroom.

I’ve been working on the sequel to Imminent Danger for awhile now, and it’s been going … not so well. My problem is that, according to my beta reader, there isn’t enough plot in the second half of the book. Fair enough. What I essentially have right now is tons of plot up to the middle of the story, tons of plot at the end … but for the second half, the characters mostly just traipse around and do irrelevant stuff.

So, obviously I need to change that. And I’ve been making extremely slow progress, but it’s been tough going because I just don’t have any inspiration for it, and I can’t bring myself to sit down and write if I don’t have inspiration. Thus, nothing gets done.

And then I brought a notebook into the bathroom.

The first step is to get that notebook and pen into the bathroom. The second step is to take out everything else that could possibly interest you. That includes books, magazines, sudoku puzzles, tablets, etc. 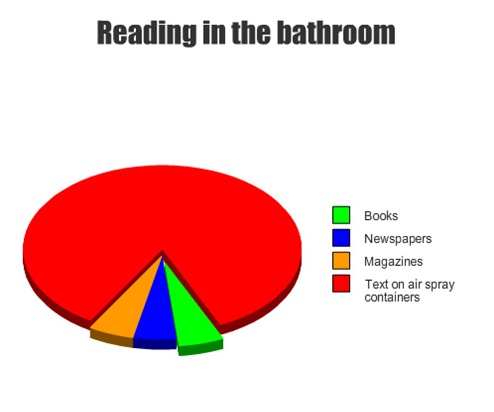 This means that, when you sit down for your daily … let’s call it “relief”, you have absolutely nothing to occupy yourself with other than the notebook. And when a writer has nothing but a notebook and a pen, what else can we do but write?

It’s worked amazingly well. My characters are getting out and doing things, meeting cyborgs, dancing to the alien version of dubstep, etc. Will all of my scribbling make it into the final version of the book? Probably not. But at least I’m writing again! What else can a writer ask for?

I can’t remember which WordPress blogger directed me to this post, but it was really interesting, and I thought I’d share it here. It’s written by Cassandra Clare, a popular YA author, and she talks about dealing with hate blogs. I didn’t even know there were hate blogs. Clearly I live in a fairyland of butterflies and ice cream mountains. Anyway, here’s the link.

Unrelated video of the day

For those of you who’ve never experienced the genius of College Humor, here’s a link. And here is one of my favourite comedy sketches/songs by them:

34 thoughts on “Writing in the Bathroom”