And Thus the Re-Writing Commences!

Posted on September 16, 2013 by Michelle Proulx

As you may recall from my previous post, I recently got my manuscript for Chasing Nonconformity (sequel to Imminent Danger) back from my beta readers. Huzzah!

I’m not going to lie — I’m having a lot of trouble with Chasing Nonconformity. Sequels are really hard, and I’ve been struggling with making sure this book has as much “oomph” as the first book. It’s a delicate balancing act — bringing enough elements from the first book to keep the feel of the world and characters the same, while at the same time introducing enough new elements to keep the story and characters changing and evolving.

My first draft, waaaaaay back in 2010, was a lot of fun to write, but there was a distinct lack of plot. The characters mostly just wandered around and did amusing things — as I said, enjoyable to write (and probably to read), but not exactly a “story”. My second draft, which I finished back in the spring of 2013, was much better — the characters actually had motivation for doing stuff! But the stakes still weren’t high enough, which once again made it feel like the characters were just milling about.

Then, a couple of weeks ago — and all credit goes to my brilliant brother Jesse — the solution to my “lack of stakes” problem arrived. I can’t tell you what it is, obviously, but it is both awesome and incredibly amusing (well, amusing to me, at least!), and it has the added bonus of wrapping up a few loose ends from the first book. Woo!

That’s pretty much how my brain works. First I write the story … then I go back and figure out how to make it make sense. Not the most streamlined of processes, but … well, for whatever reason it seems to work for me!

So, for everyone keeping track of my writing progress, Chasing Nonconformity is slowly but surely getting done. Assuming all goes well, this should be the last major re-write. I figure that’ll take me a month or two. So going into December the story should be ready to go out to another round of beta readers … give them two months to read it, since my beta readers are notoriously slow … putting us at the start of February …

Therefore I’m going to tentatively put the release for Chasing Nonconformity somewhere around the Spring 2014 area. I was initially aiming for January, but that’s just not going to happen now. Onwards and upwards, my friends! To victory!

Unrelated link of the day:

Are you a 90s kid? Prepare to be blown away by nostalgia:

Semi-related image of the day:

Got my book back from the beta readers!

Posted on September 6, 2013 by Michelle Proulx

That’s right! As of yesterday afternoon, I’ve officially reacquired Chasing Nonconformity, the sequel to my debut novel Imminent Danger And How to Fly Straight into It, from my beta readers. Huzzah!

Granted, I only actually got it back from two beta readers — specifically, my mother and brother. Three big cheers for them! The rest of my so-called “beta readers” haven’t done a whole lot of reading. But that’s okay! Because I’m going to be doing a lot of re-writing (again), so by the time they remember they’re supposed to be reading the book, I’ll have a new draft for them anyway. Then they can busily not read the new draft while I start on the next one. This plan, my friends, is fool proof. FOOL PROOF!

Ahem. So, onwards and upwards with the re-writing! I’ve got a lovely 200 page manuscript full of red ink sitting beside me just waiting for me to begin my perusal, so that’s exciting. More awesome, however, are the small cartoons I noticed that my mother and brother and slipped into the manuscript every now and again. They’re quite artistic, my family members. Thus without further delay, I present to you:

Note: Please don’t ask me to explain these, because … well, because I can’t. Enjoy! 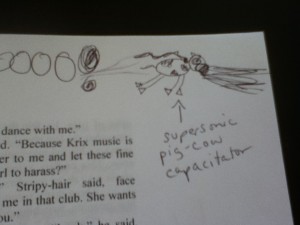 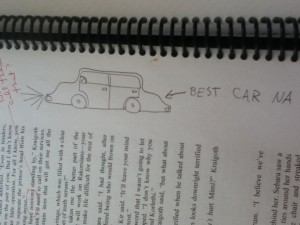 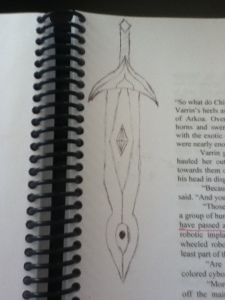 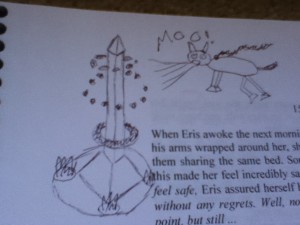 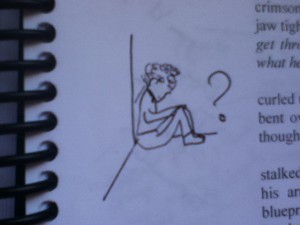 And that about wraps that up. Now that you’ve seen the drawings, can you imagine the kind of ridiculous comments and suggestions I have to put up with from these people???

As much as I complain about how mind-numbing editing and re-writing can be, I actually do really enjoy the writing process. Although banging out that first draft is definitely my favourite part of writing, the subsequent months/years of editing can be quite fun, and it’s all worth it when you get to sit down and read your finished, polished, wonderful story.

But there’s one part of writing I absolutely cannot stand. And that part, my friends, is waiting for beta readers to read the manuscript.

It drives me crazy! Working for months and months to produce a piece of writing you think is finally ready for other human eyes to see, sending it off to a select few … and then waiting and waiting and waiting for them to respond with their critiques. Obviously, I’m incredibly appreciative that they’re bothering to read my story at all, and I recognize that reading an unpolished manuscript is time-consuming. But I want to get their suggestions and get started on revising now, dammit!

The obvious solution is, of course, to impose a time limit on the beta reading process. Except that doesn’t work, because my elite beta reading team knows that I value their opinions, and that I will wait as long as necessary to receive said opinions. Curse my dependency! Curse it!