Posted on September 9, 2016 by Michelle Proulx 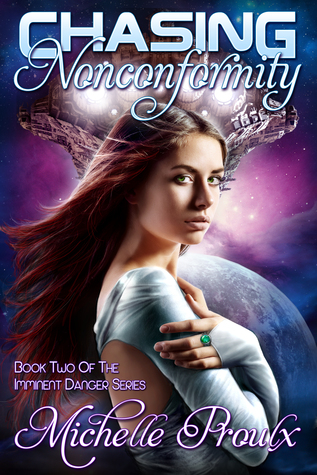 Balancing an eye for the absurd with actual danger, Proulx creates a science-fiction tale that is light and fast without being shallow or cloying.

This novel is the second in the Imminent Danger series. Thus, ‘spoilers, darling’.

Still annoyed after the revelation that Varrin’s thoughtful gift was actually a marriage contract, Eris Miller wants a vacation more than ever. However, Varrin’s ship, the Nonconformity, is in the clutches of the annoyingly benevolent galactic government, and Varrin seems even more determined than his usual arrogant, entitled self to get it back. Meanwhile, on Rakor, Varrin’s father – the Emperor – dispatches two lethal killers and a bad poet to bring his son home, whether he wants to return or not.

This volume continues in the same vein as the first one: real peril mixed with farcical situations. Punk tribble-analogues face genetically superior warriors. Alien music turns out to be a…

One thought on “Chasing Nonconformity by Michelle Proulx”