Nikola Tesla is AWESOME. Here’s Why …

Posted on September 9, 2012 by Michelle Proulx

Whilst surfing the internet with no particular goal in mind, I stumbled upon this funny info-graphic from The Oatmeal:

Why Nikola Tesla was the greatest geek who ever lived

It begins with a basic overview of what makes a geek a geek. Then they start into the info on Tesla — the Serbian-American inventor best known for inventing alternating current power. But then, as you get farther down the info-graphic, you start to learn about Edison, and how he ripped off Tesla’s ideas, and about all the other people who got rich off of Tesla’s inventions, and how Tesla was totally insane and was in love with a pigeon and died a virgin because he devoted his entire life to science and invented everything from radio, to radar, to the first hydroelectric plant, to cryogenic engineering, to the remote control. Google if you don’t believe — it’s all true. The guy was a super-genius, and most people only know him for the tesla coil.

Anyway, check out the info-graphic — it’s really interesting, and also really funny (unless you love Edison, in which case don’t read it).

Then, at the bottom of the info-graphic, I found this image:

So I clicked the link, which took me to the indiegogo fundraising page. There, I learned what exactly they were trying to fundraise for:

Tesla’s final laboratory is located in the sleepy town of Shoreham, New York.  It’s known as Wardenclyffe and it’s where Tesla attempted to build a tower that would provide free wireless energy to the entire earth. Unfortunately, Tesla lost his funding before the project was completed and in 1917 the Wardenclyffe tower was demolished.  Subsequently, the land was sold to a film and paper manufacturer.

However, the land, laboratory, and foundation beneath the tower are still there and very recently went up for sale. And right now a non-profit is trying to buy the property and turn it into a Nikola Tesla Museum. The property is listed at $1.6 million, and this non-profit has received a matching grant from New York State of up to $850k.  This means that if we can raise $850k, New York State will match us for that same amount — putting the total raised at $1.7 million.

There is currently another offer on the table from someone who wants to purchase the property potentially tear it down or turn it into a retail establishment. There is no Tesla museum in the United States, despite Tesla’s extraordinary accomplishments.  If we can outbid this other person and buy the land it will permanently be protected as a historic site and eventually converted into a Nikola Tesla Science Center.

The folks behind this project are a 501(c) non-profit organization and they’ve spent the past 15 years trying to find a way to save this property.  This IndieGoGo account is linked directly to their bank and all the funds will go directly to them.

I’m sorry, the man attempted to build a tower that would provide free wireless energy to the entire earth?!!!

That sounds like the kind of guy we should be building a museum for.

And yes, I did the research to make sure this isn’t a scam. Here’s a link to the Tesla Science Center, where all the donated money is going. Here’s an article from the Guardian about the campaign.

Again, here’s a link to where you can donate to the Tesla Museum fundraising campaign.

I don’t usually donate money, as I’m fairly broke. But I guess I have a soft spot in my heart for misunderstood geniuses who almost single-handedly ushered in a second Industrial Revolution. I donated $33, which netted me a “Tesla > Edison bumper sticker”. Pics or it didn’t happen, right? 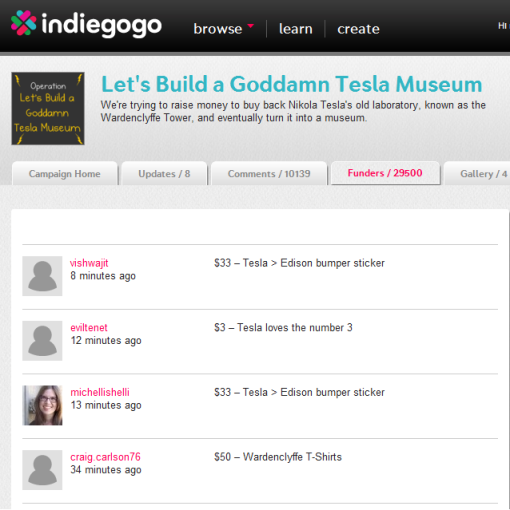 It’s kinda small, but there’s me, 3 down — michellishelli. My bumper sticker will soon be winging its way toward me. Now all I need is a car to put it on.

Anyway, don’t feel pressured to donate or anything. I just thought it was a really great cause, and since I’ve never heard of it, I figure you guys might not have either. But now you have, so my work is done!

If you do donate, let me know in the comments! We can fangirl/fanboy about how awesome Tesla is.

Random Writing-Related Comic of the Day:

6 thoughts on “Nikola Tesla is AWESOME. Here’s Why …”